6 March 2011 - The United Nations Mission in Sudan today welcomes the agreement signed on 4 March by representatives of the National Congress Party (NCP) and Sudan People's Liberation Movement (SPLM) to adhere to a full and immediate implementation of the Kadugli Agreements of 13 and 17 January 2011.
The UN-facilitated meeting held at the UNMIS compound over the weekend addressed the current security situation in Abyei and established a standing committee consisting of representatives from both parties, the Sudan Armed Forces and the SPLM, both police forces and security services and the Command of the Joint Integrated Units (JIUs).
The agreement reiterates the need for the full and effective deployment of JIUs to specific locations in the Abyei region and decided the immediate withdrawal of all other forces from the area, while ensuring that the JIUs deployed in Abyei do not include any of those who were involved in the clashes of 2008 or elements that may have a conflict of interest regarding the Abyei dispute.

Welcoming the agreement, Haile Menkerios, UNMIS Special Representative for the Secretary General said: "This agreement is an important step. The recent clashes in the Abyei area have highlighted the challenges still to be overcome by both sides and I expect a speedy and effective implementation of the agreed measures. The UN is ready to facilitate this, as requested by both parties in this agreement." 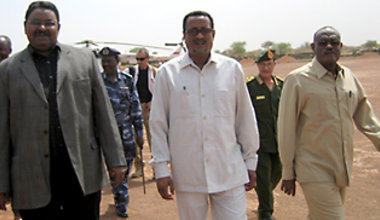 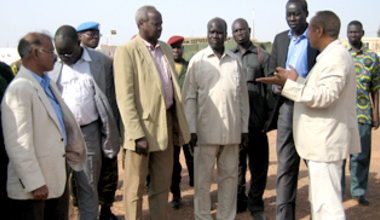 Left: Arrival of NCP delegation at meeting on Abyei.

The International Year of Volunteers (IYV) was first celebrated in 2001. It played an important role in raising worldwide awareness about the contributions of volunteerism and strengthened approaches at the national level to recognize and support voluntary action.

I joined UNMIS in August 2009 as an Information Management Assistant with the Records Management and Archives (RMA) Unit in Khartoum.

The new Deputy Chief of the UNV Peace Division, Moraig Henderson, recently paid a visit to Juba to congratulate UN Volunteers for their support to the Southern Sudan self-determination referendum, a key milestone of the 2005 Comprehensi